"On Thursday, Mum took me shopping. It
sounds harmless if you say it fast enough,
doesn't it?"
- o - 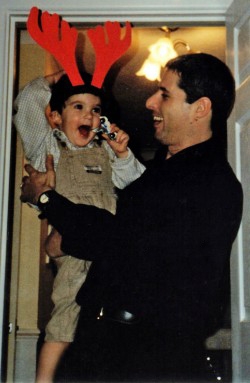 When I was at Manchester Polytechnic, ostensibly studying for a degree, one of the highlights of my time there was getting a letter from Michael. Full of gentle humour, the letters showed a literary side to Michael that can still reduce me to laughter 15 years later. The above line was written as he was recovering from his first heart operation.

Reading through the letters recently, what surprised me wasn't so much the realisation that Michael was only 23 or 24 when the letters were written, but how much of my own writings have been influenced by Michael's style.

Michael taught me so much, from how to play backgammon to the skills necessary to cheat at cards better than our younger brother; from how to scan a line when writing a lyric or poem to the proper glass out of which to drink scotch - "one with a hole at one end and no hole at the other."

I've often said that Mike was my hero. And he was. The courage he showed throughout his illnesses and operations, the way he dealt with people and the way he supported me in all I did was everything I could have wished from a brother. We shared a particularly dry sense of humour and it was rare that a few days went by without one of us calling the other to share a joke or to tell the other a particularly funny story or a funny event that had happened to us.

Yet of all the memories that spring to mind about Michael in the 33 years I was privileged to have him as my 'big bruvver', four stand out as clear as day...

August 1983
I'd driven up to Harefield to visit Michael before his first op. He was in the ward and when he saw me, he grabbed his dressing gown and we headed for the café. As we were leaving the ward, a nurse rushed past us and went to the bed next to Michael's. We didn't think anything of it until another nurse, then a doctor, then another nurse, pushing a trolley pushed past us. Naturally concerned, we headed back into the ward to see them crowding around the bed next to Mike's. The curtains were quickly drawn and Michael suggested we leave. At that moment, we realised we'd left Michael's cassette recorder playing.

In the sort of accident of timing that only happens in real life, Michael reached out to turn the cassette recorder off just as the next track started. The song was by a band called Dollar.

The title of the song? "Give Me Back My Heart"

We barely made it out of the ward before doubling up...

- o -
"I'm looking forward to our engagement party. My only problem
is how to ask Jeff for a day off on a Saturday. I suppose on
my knees with my hands clasped together as if in prayer..."
- o -

Wednesday 9th October 1985
Lynne and Michael's Wedding Day. As their Best Man, I'm theoretically responsible for getting Michael to the shul shaved, showered and sober. Failing that, it's my job to just get him there. Anyway, Mike has a few things to sort out at their new home, so I tag along and we spend a few hours together. Precious hours that I wouldn't swap for anything. We tell jokes and pass the time, two brothers out together letting the rest of the world go by.

We get to the shul and get changed into the penguin suits. Flip forward a couple of hours and Lynne and Michael are now married. Mazeltovs still ringing in everyone's ears, the line-up has ended and we poor fools still in morning suits go to the changing room to, well, to get changed - into evening suit. For whatever reason, Mike and I take the longest to get changed and we're left alone for five minutes together after everyone else has left.

As a throwaway line, just to ease our nervousness for the forthcoming speeches, I make a comment that I'm sure glad I've got everything with me :"Suit, shirt, shoes, speech..." Mike grins and repeats the mantra. "Suit, shirt, shoes..." There's a horrible pause followed by a word beginning with 's'. But it's not "speech", it's a shorter word.

Mike looks at me in horror, and I'm beginning to realise what's going through his mind. "Don't tell me you've lost your speech," I tell him.

"I know exactly where it is," he says, making me very relieved for a moment, before continuing, "it's in my wardrobe at home."

After another split-second when we struggled not to crease up at the ridiculousness of the situation, Mike took control in that calm way that he had. He borrowed a pen off of me - the pen that he and Lynne had given me as a thank you for being Best Man - instructed me to get  a menu and then stand outside the door and leave him for twenty minutes...

An hour or so later, after I had given my speech, Michael stood up to make his. He started off with a line that fans of Rowan Atkinson would recognise in a moment : "When I left home this morning, I said to myself 'you know, the very last thing you must do is leave my speech at home'. So sure enough, when I left home this morning, the very last thing I did was... to leave my speech at home."

As I say, it was a familiar opening to fans of Rowan Atkinson. To everyone else, it was merely a clever start to a speech. To everyone else that is, except our mother. Mum, you see, knew exactly how the speech should have started and there was a classic moment - thankfully caught by the photographer - when she realised that he wasn't joking - he really had forgotten the speech...

July 1997
After Mike's second heart operation, Laura and I took our then 20 month old son to see him. Michael had often told me that being a parent was a mixture of joy and heartache but that he was absolutely revelling in being an uncle. When we got there, he insisted on going outside with us, for Philip's sake, he said, but I suspect that he wanted to go outside as well, 'breaking parole' if you will. He took Philip by the hand and went for a small walk with him.

Looking back, watching Mike and Philip walking together, and a little later, Michael holding Philip on his lap, I remain convinced that it was at that moment that Philip started his adoration of Michael, a feeling that lasted after Michael's death.

December 1997
The last big family occasion was on Boxing Day 1997. It had long been a family tradition that the family got together at Lynne and Michael's on Boxing Day and this year was no different. The last photo I have of my brother is of Michael lifting Philip to the sky, the pair of them laughing out loud.

He looked so well, having regained all the weight that he'd lost through his illness, still with a very slight tan from the holiday he, Lynne and the boys had taken in late 1997.

That's how I'll remember my brother, full of life, laughing and surrounded by his family.